Join my journey with The Sketch.

Join my journey with The Sketch. Among the exciting content: 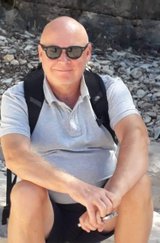 Born and raised in Scandinavia, he began playing the piano at 4 and aspired to become a professional pianist, but struggled with stage-fright. In his adolescence, he discovered a passion for computers and programming, and a profound understanding of classical music and literature.

After studying the Humanities for 10 years at university, he pursued a career in technology, but was made redundant during the IT-bubble and ended up driving a taxi. He continued composing, now exclusively on his iPhone 3, during the quiet moments between fares, on bus and train rides, and during weekends and travels.

In 2014, he suffered a severe stroke that left him unable to walk. Through long, solitary walks in the forest, he found the inspiration and motivation to relearn how to walk. These experiences also resulted in a profound shift in his mindset, allowing him to approach composing with a renewed sense of purpose and creativity.

In 2017 he moved to Hungary. In Budapest, he continued to find inspiration in the rich tonal world of Hungarian and Carpathian basin folk music, as well as the sounds of his daily walks around the city.

His piano works are influenced by composers such as Bartok, Debussy, and Russian composers in general, while his electronic and ambient pieces are heavily influenced by Eduard Artemyev, Igor Savin, Károly Cserepes, and Biosphere.

He enjoys a peaceful life composing and embracing the pleasures of seclusion, good coffee and cake, Hungarian food, concerts, thermal baths and a Monte Christo 05 with a glass of Unicum.